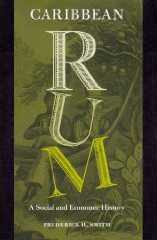 Over the past couple of decades I have read and studied most rum books available in the market. I can honestly say that this is the first book in a very long time to contribute new knowledge to the industry. Rather than following the true-and-tried formula of including a bit of history, overview of some rum companies and their products and offering a plethora of rum cocktail recipes, this book focuses exclusively on the social and economic impact of rum, from the slave plantations to modern society.

I was impressed by the level of research performed by the author to document the stress-relieving effect of rum on slaves (their owners would often make rum available and would encourage them to drink it in order to give them frequent escapes from reality), the ratios of rum production to rum consumptions per country in the Caribbean through the years, the social acceptance of drunkenness and its relationship to violence, etc.

Another area of the book that I was very impressed by, is the section devoted to describing the emergence of the rum economy, the threat it posed on European alcohol industries and the subsequent legislations that were put in place in an attempt to control the proliferation of rum.

All in all, this book is full of interesting facts and tables, all pearls of information for the true rum aficionado. Those seeking colorful pictures of ornate cocktails with palm trees on the background will be disappointed, but then again, there is a plethora of books to satisfy those consumers. This book is well researched, well written and I’m certain will be quoted by many future works on rum.

Luis Ayala is an author and rum consultant with Rum Runner Press, Inc. To learn more about rum, please visit http://www.rumshop.net/ or http://www.rumuniversity.com/.
Posted by Luis Ayala at 5:00 AM No comments: 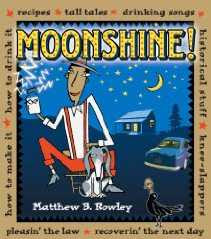 Moonshine: Recipes * Tall Tales * Drinking Songs * Historical Stuff * Knee-Slappers *How to Make It * How to Drink It * Pleasin' the Law * Recoverin' the Next Day
by Matthew Rowley
An extremely engaging book about an excellent subject! Behind each page a new jewel: be it an anecdote, a recipe, a quote, an illustration or a fact, each and every page was worth reading. Most books about fermentation and/or distillation fall short in one area or another: some lack technical information, others lack historical facts; this book has it all and is written in a very clean and concise manner. If you are interested in makin’ your own and only want to buy one book, this is it! Here is a list of the chapters to give you an idea:

To top it all, the book is attractive enough to make it a coffee table item, where I’m sure it will be the subject of many conversations.
Luis Ayala is an author and rum consultant with Rum Runner Press, Inc. To learn more about rum, please visit http://www.rumshop.net/ or http://www.rumuniversity.com/.
Posted by Luis Ayala at 7:33 PM No comments:

Rum: Gate Of The Imagination

“Traveling is like flirting with life.
It's like saying, ‘I would stay and love you,
but I have to go; this is my station.’”
-Lisa St. Aubin de Terán
Traveling to the Caribbean always brings a few days of sheer pleasure into my mind. No amount of airport delays or missed connections will ever make me give up visiting the islands. As the trips approach their end, however, I'm always filled with sadness, since I know that a return home is imminent. Perhaps that is why I enjoy bringing back so many rum bottles with me: it is as if each bottle holds a memory, an image, a dream of living in the tropics, and every time I drink from that bottle, part of me is magically transported back.
I like drinking other spirits, Tequila for instance, but they never have the same effect on me: I rather be surrounded by sugarcane fields and palm trees than by blue agaves!
Following are some of my fondest memory from the Caribbean:
What are your most pleasant rum memories? Where does your mind wander when it needs a break?
Luis Ayala is an author and rum consultant with Rum Runner Press, Inc. To learn more about rum, please visit http://www.rumshop.net/ or http://www.rumuniversity.com/.
Posted by Luis Ayala at 10:05 PM No comments: