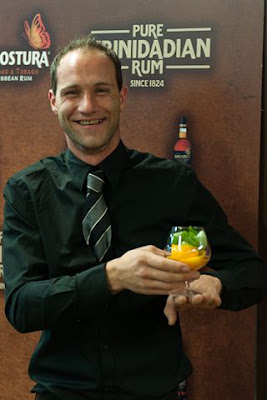 Angostura brought the carnival spirit to London when they held the European Finals of the International Angostura Cocktail Challenge at UK RumFest 2010. German mixologist Wolfgang Mayer took the European crown, and goes through to the grand finale taking place during Trinidad’s famous carnival, in March 2011. Brian Woods, Angostura’s Senior Marketing Manager was delighted that the event took place at RumFest. “RumFest is now an integral part of the drinks calendar in Europe and, while it is held in London, it is a truly International event. The interest from the visitors to the event in our Cocktail Challenge made it a memorable experience for all our competitors. It’s not often that bartenders get to make drinks while being cheered on by several hundred knowledgeable people”.

Giselle announced the Cocktail Challenge winner at the Golden Barrel Awards and comments: ‘The standard this year has been extremely high so it was very difficult to choose a winner. However both of Wolfgang’s cocktails really were incredible and the mix of ingredients worked perfectly. His cocktail ‘Seven Senses’ stood out though, due to its freshness, originality, balance and aftertaste, whilst Wolfgang’s presentation skills were professional, confident and creative.’ Mayer was delighted and surprised to win the European heat saying “It is an incredible feeling to win, especially with the standard of competitors involved. It was great spending time with so many world class bartenders from all over Europe and to share cocktail ideas with them. To have won when the competition was so fierce is a great achievement for me”.

As European winner, Wolfgang will now face winners from North America, South America, the Caribbean, Asia, Australia, Africa, Trinidad & Tobago and India. The overall winner of the Global Competition wins a cash prize of $10,000 US and a year-long contract as the global Angostura brand ambassador. When asked for his thoughts on the global final, Mayer was keen to play down his chances. “It will be a great experience to visit Trinidad & Tobago for the first time. Winning the overall final will be really tough but I will be preparing hard for the competition and will do my very best to make Europe proud. Most of all, I will relax and just try and enjoy the whole experience”.
Posted by Luis Ayala at 7:46 AM No comments:

US President Barak Obama has eased some of Washington's economic sanctions on Cuba but the trade embargo is still in place. Michael Voss reports from Havana.

Posted by Luis Ayala at 9:51 PM No comments:

You're a rum lass, Marisa

Posted by Luis Ayala at 6:51 PM No comments:

Hoping to cash in on "the surfing lifestyle," officials at Jacksonville-based Seven Tiki Rum believe they have found the perfect mixer for their Polynesian-style blend of alcohol - pro surfers.

Posted by Luis Ayala at 8:51 AM No comments: