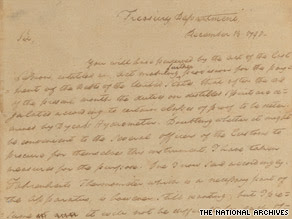 WASHINGTON (CNN) -- A 219-year-old document that stemmed from alcohol tariffs to pay off Revolutionary War debts -- and signed by Alexander Hamilton -- became the property of The National Archives on Thursday.

The historic letter, which has been the property of the Bureau of Alcohol, Tobacco, Firearms and Explosives (ATF) for the past 35 years, chronicles the federal government's earliest efforts to regulate alcohol.

In the document, Hamilton, the first United States secretary of the Treasury, discusses tools for customs agents to determine -- for tax purposes -- the alcohol content of St. Croix rum and other imported spirits.

Historians said the document is a notable footnote in American history. In 1789 and again in 1790, Congress imposed alcohol tariffs to pay Revolutionary War debts. In response to the tax on imports, Americans began distilling their own spirits. And when the federal government began taxing those beverages, citizens staged the "Whiskey Rebellion," harassing and threatening federal agents in several cities.

But in 1794, the government squelched the uprising, helping to establish the federal government's authority in disputes with individual states.

Even non-historians might appreciate the timelessness of the dog-eared document, given its skillful use of bureaucratic language to deliver bad news. One eye-glazing, 76-word sentence probably can be summarized as follows: "We don't have the thermometers you'll need, so for now, use the ones you've got."

The document, dated Dec. 18, 1790, is an original draft of a "circular letter," an official memo that would have been hand-copied and sent to customs officers, historians said.

"In this circular letter, Hamilton attempts to provide customs officers with new tools to more efficiently do their jobs," said Kenneth Melson, acting director of ATF. Hamilton notes that he is sending a hydrometer -- used to determine the specific gravity or density of liquids -- to ports so that customs officers can determine the proof of imported beverages.

Hamilton says he intends to provide two hydrometers to every port; one to be used as a standard or check. "But it is not possible in the first instance to send both. Hence one only will accompany this letter," he writes.

In a postscript, he adds that he is also sending a "Tin Cylinder" to hold liquor while its alcohol content is being measured.

Archivists said the early history of the Hamilton circular is not known. But in the mid-1970s, an ATF spokesman and autograph collector -- Howard Criswell Jr. -- came across the letter in a catalog from an autograph dealer in New York City. He purchased it for about $100, intending to use it in an ATF bicentennial exhibit. Criswell, now 84, is retired and lives in Maryland.
The document remained in an ATF safe until it was rediscovered by ATF employees during a relocation of its headquarters building in 2005.

ATF officials said they had once planned to frame the letter, but were told that it would be damaged by exposure to light.

The National Archives said the document will become part of its permanent holdings and will be preserved in a locked, temperature and humidity-controlled stack area at its facility in College Park, Maryland.

Posted by Luis Ayala at 5:25 AM No comments:

* Captain Morgan was a real person. Sir Henry Morgan was a rather bloodthirsty 17th-century Welshman who blurred the line between privateer and pirate, plundering ships in the Caribbean. * Vice Admiral William Penn, whose son later founded Pennsylvania, was the first captain to make rum a daily ration on his ship. By the late 17th century, a sailor with England's Royal Navy received half a pint ...

Posted by Luis Ayala at 3:00 PM No comments:

Grocery robbed of rum twice in one day (Trinidad Express)

TWO bottles of puncheon rum were the items of desire for two men, on separate occasions, last Friday. Ralph Ramlal was disenchanted he was unable to go on an excursion with his friends. So he walked into an MS Food City supermarket in Debe, picked up two bottles of the rum and walked out. 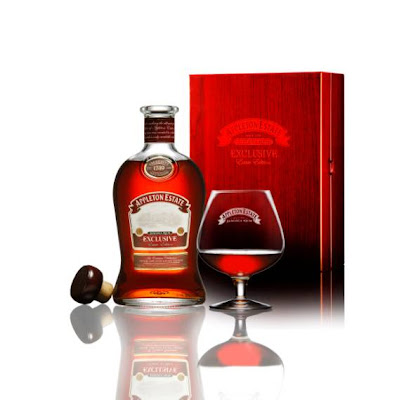 Appleton Estate Exclusive is a luxurious blend of rums that were created to celebrate the terroir of the Nassau Valley where the Appleton Estate is located. It is presented in a proprietary bottle, whose design was inspired by Appleton Estate Jamaica Rum’s signature bottle, with a cork finish and is packaged in a beautiful wooden gift box. It will be sold for US$250.00.

“There is nowhere else in the world that you can go and get a bottle of Appleton Estate Exclusive and this makes this product and a visit to the Appleton Estate truly unique and special.”

According to Master Blender Joy Spence, she carefully selected the rums that make up Appleton Estate Exclusive Edition for their unique qualities. “I chose the rums that make up this blend because they reflect the elements of terroir that are exclusive to the Appleton Estate. The Nassau Valley’s rich fertile soil and unique microclimate that features warm days, gentle afternoon showers and cool nights are the perfect conditions for growing sugar cane and tropically ageing rum.

“In addition, the pure water from the Estate’s natural spring; the varieties of sugar cane that we cultivate and our one-of-a-kind copper pot stills all contribute to the unique qualities and distinctive character of Appleton Estate Exclusive Edition. It is a rich, smooth full bodied rum and I would recommend that it be enjoyed neat or on the rocks.”

The Appleton Estate is located in the picturesque Nassau Valley in St. Elizabeth, Jamaica, “the Home of the Finest Rum in the World Since 1749”. The attraction offers guided tours of the artifacts that tell the over 250 year history of the Appleton Estate as well as a visit the distillery and one of the Company’s ageing warehouses.

Colour: Deep amber with red highlights that perfectly reflect the rich soil of the region.
Nose: Lots of oak and vanilla notes that are developed naturally during long years of ageing under tropical conditions.
Taste: The fruity sweetness that arises as a result of the varieties of sugar cane that are grown on the Estate perfectly balances the woodiness that is derived from ageing.
Finish: The finish is long and smooth.

In Beaufort's Old Burying Ground lie Union soldiers and Confederates, slaves and free men. In the cemetery is a British soldier buried upright and facing England and a grave marker dated 1756. But perhaps the most visited grave is not the oldest, nor one of the most heroic.

Posted by Luis Ayala at 5:46 AM No comments:

Halewood International is preparing to add a white rum to its Lamb's portfolio. Lamb's White is going to be trialled in the on-trade before Christmas with a view to rolling it out fully after Christmas.

Posted by Luis Ayala at 3:46 AM No comments:

Whatever you do, don't call it Brazilian rum (Press of Atlantic City)

The caipirinha, made with cachaca, is a distilled sugar-cane syrup served by bartender Justin Gregory at Cuba Libre at the Tropicana in Atlantic City.

Posted by Luis Ayala at 1:46 AM No comments:

Avast, me hearties, Saturday is the day to grab your pet parrot and join me in singing a bawdy sea chantey, drinking a mug of grog and celebrate International Talk Like A Pirate Day.

Posted by Luis Ayala at 5:46 PM No comments:

Posted by Luis Ayala at 4:47 PM No comments:

SINCE Kununurra farmer and operator of The Hoochery distiller Spike Dessert was left without access to locally produced molasses after the Ord River Sugar Mill closed in 2007, he decided to go it alone.

Like many Yale students, I spent this summer abroad, in Paris, taking a language class with the best people possible, collectively trying to enjoy the good life. A life without Dubra or Natty Ice, a life that included sunsets and drinking wine by the Seine, flaky, buttery croissants from the local boulangerie and beautiful clothes that were on sale during the July soldes. Alas, all good things ...

WASHINGTON — Yo-ho-ho and a bottle of rum. With little fanfare, a deal is moving forward to direct billions in U.S. tax dollars to an unlikely beneficiary — the giant British liquor producer that makes Captain Morgan rum.

Posted by Luis Ayala at 2:31 AM No comments: