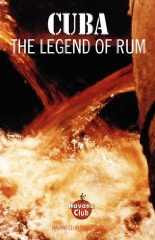 This book takes the reader on a journey that begins with the arrival of Columbus to the New World, including insightful background information about Marco Polo and the influential role he played in motivating Columbus (and his financial supporters) to find the mythical Cipango.

The entire first chapter is devoted to the introduction of the sugarcane, the interaction of the European conquistadores with the local Indians and, the economic importance of sugar.

The second chapter discusses the influence of Spanish and other European distillation traditions in the establishment of the foundation of Cuban rum.

Chapter Three is dedicated to the craft of Cuban rum, with special emphasis placed on the role played by the Master Blender (Maestro Ronero) and the style itself, which differentiates rums from Cuba from those from other countries around the world.

The remaining four chapters are a combination of tasting techniques, first person accounts and descriptions of different Havana Club products, classic cocktail recipes and important historical events and/or figures which have elevated the global image of Cuban rum.

Overall this book is well-researched and presented. Serious rum enthusiasts should definitely read it to fill a gap which may otherwise go unattended, as not many books have been written about rum from this very specific Cuban perspective.

Luis Ayala is an author and rum consultant with Rum Runner Press, Inc. To learn more about rum, please visit http://www.rumshop.net/ or http://www.rumuniversity.com/.
Posted by Luis Ayala at 7:13 PM