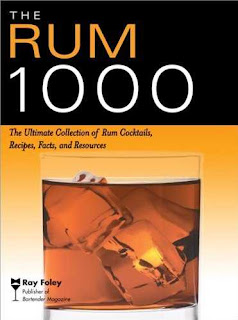 I was very excited when I received my copy of Ray Foley's "The Rum 1000," especially since it had been a while since I had last reviewed a rum book.
The book is organized into five chapters:
Chapter one: 75 rum facts
Chapter two: 700 rum cocktails
Chapter three: 50 food recipes using rum
Chapter four: 75 rum producers and
Chapter five: 100 rum websites

Adding all the above you get the "1000" referred to in the book's title. While I was pleased with the cocktail and food recipes, all other chapters left me a bit disappointed, especially chapter one, as many of the facts are wrong and others are misleading. A few examples:

I believe that Mr. Foley could have avoided some of the confusion by elaborating on each fact, rather than simply stating it in a brief sentence, especially the ones dealing with controversial topics, such as aging (for the record, storage in stainless steel containers is NOT aging).

Another suggestion for the second edition -and I do hope there will be one, as the world needs more books about this wonderful spirit- is to maintain the lists of rum distillers and rum websites on-line, and provide a link to these lists on the book, this way the content can be dynamically updated to allow it to reflect the changing times.

I recommend this book to those looking to enhance their libraries with a collection of food and drink recipes. Serious rum enthusiasts looking for more -and more accurate- rum facts, however, will be disappointed.

Luis Ayala is an author and rum consultant with Rum Runner Press, Inc. To learn more about rum, please visit http://www.rumshop.net/ or http://www.rumuniversity.com/.
Posted by Luis Ayala at 6:17 AM

Thanks for posting this review, I was about to buy it. Actually, I might still buy it for the cocktails recipes (I collect cocktail books). Could you tell me if there is a recipe to make Falernum (sp?) in this book?

You are welcome! Here is a very good recipe for Falernum:

Directions:
Use a paring knife or vegetable peeler to slice the top layer of peel from the limes. Pare any white pith from the inside of the peels. Discard the lime flesh or save for another use, if desired.

Combine the peels with the cloves, almonds, sugar and white rum in a large glass container. Store, loosely covered, in a sunny place for 3 days, then strain and discard the solids; return the liquid to the bottle. Cover and store at room temperature.

Recipe Source:
From Todd Thrasher of Restaurant Eve in Alexandria.

We have many more recipes at:
http://www.rumshop.net/drinkrecipes.html