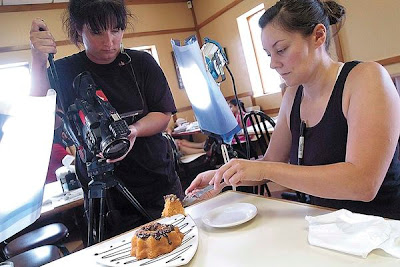 (By Amy Friedenberger , For the Mirror)Australian chef and frequent television host Curtis Stone tried Joyelle Scavone's rum cakes last year, but apparently they are still on his mind.

He even thinks they are one of the best things he's ever eaten.

Stone will tout Scavone's ScRUMptious gourmet rum cakes as his pick for "The Best Thing I Ever Ate" on an upcoming segment of the show on the Food Network. The network was in Altoona on Monday, shooting footage at Scavone's husband's restaurant, Anthony's Pizza and Grill, on Fourth Street in Altoona.

Each episode of "The Best Thing I Ever Ate," going into its sixth season, includes eight selections from culinary hosts and chefs that focus on a theme, such as guilty pleasures or burgers.

Click HERE for the complete story. Please visit us at The Rum Shop for all your rum-related needs, including purchasing rum on-line, rum recipes, rum tasting notes, rum event information and rum consulting services. "Got Rum?" Magazine is back in circulation, get your free copy HERE.
Posted by Luis Ayala at 9:36 AM